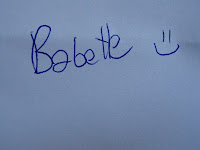 When I was in my last year of University I had one class called The Sociology of Media ... or something like that.  Our major assignment for that class was to write a paper about "the media" and its "sociological influences".  Sigh.  Broad enough topic for you?  The Teacher (whom I had little respect for) seemed to think that the only form of "media" worth discussing were television shows.  No discussions about print publications or the 'newest fad' called "the internet".  Instead she prattled on about fictional characters, in fictional towns, in fictional times.  So the assignment sounds easy enough right?  Wrong.

I had one television channel.

As a struggling student, working nearly 40 hours a week and attending Uni full-time my girlfriends that I lived with and I decided that we didn't need cable television.

The result of having 'the channel'?  We all studied a lot ... (snicker-snicker).  The truth is that one of us studied a lot ('til she got a boyfriend and then she spent all her time at his house - we suspect that he had cable ...)  The "other" roommate had a full-time boyfriend ... he too, had cable at his apartment.  And that left lil' ol' me, and my dearest friend Karen alone in the house ... just us, 'the channel' and bottles and bottles of wine.  We cooked, we drank ... we danced around to the Stone Roses and when we had both saved enough money we'd rent a foreign film from a little independent video store (which I'm sure is long gone) down the road from our crappy apartment.

On one such occasion, over a bowl of mushroom risotto, snap peas and maple-glazed salmon, we started talking about 'the assignment'.  "WHOA IS ME", I proclaimed, "how can I write a paper about 'the channel'?!?!?  I will most certainly FAIL!!!"  Karen, being the genius that she is, said ... "she just said TELEVISION right?  Well, we're about to watch a movie ON the television ... surely that counts!?!?!?"

This, dear readers, is the marking of a best friend.

The following day, we returned the rented movie, and I set about looking at the various boxes that were on display ... yes ... I said boxes ... we had a VCR ... gawd I feel ancient right now ... I digress.  Titles like "Big Night", "Like Water for Chocolate", "Tampopo", "Eat, Drink, Man, Woman" and "Babette's Feast" emerged - and so, combining my love of food (and foreign films!) I spent the next week watching "foreign foodie films" and examining the relationship that the characters had toward food, how food was portrayed in the films, and how (I thought) these characters (and the 'character' of food) influenced our modern day world.  I got an A ... and my roomie-Karen and I celebrated with (can you guess?) a bottle (or two) of wine.  And if memory serves ... some BBQ'ed baby octopus ... but that story friends, is for another post.

Fast forward thirteen years (whoa ...) and I'm participating in the July Vegan Food Swap.  I know it's not July ... not even close ... but this is a time of reflection, and frankly I've JUST NOW busted into some of the treasures I received ... as I had to make room in the pantry for more goodies ... I digress ... for the moment ...

I sent goodies to the Gatineaus! Ahhh the Gatineaus - how I love thee ... I should have couriered myself to Teenuja at Vegan Lovlie ... I would have ... the postage was going to be a killer though ... :)

The person sending ME vegan foodie delights was ... Babette from sunny-Montreal!  Also from the FRENCH blog Vegan a Montreal.  Brush up on your high-school French and check her blog out - it's fabulous ... she also has 3 cats, so anyone who has THAT much kitteh-luvins in their life MUST be a wonderful person!

It's funny that her name brought such a FLOOD of memories back - I was instantly transported back to our crappy apartment.  Where the wind, rain and snow came thru the windows and froze us.  Where the hot summer sun and lack of AC made July and August nearly unbearable.  Where hearts were broken, romances began, and where we had a stuffed pet-mouse and penguin Pez dispenser as resident pets.

Where was I?  Ah yes, my foodie-package!  OH THE TREATS INSIDE!!!!  I have actually had to do some research on what-to-do with some of the ingredients and if I'm being honest I'm waiting for a quiet weekend to FULLY delve into the treats ... wanna see what Babette sent me?


So dear Babette, many, many thanks for the wonderful package.  Who knew it would contain so many wonderful memories.  Merci beaucoup mon amie.  And in the spirit of old films, and even older memories, tonight I'm treating myself to a glass (bottle?) of wine, and a foodie film ... possibly two ... depends on how long I can make the wine last <cheers>.
Posted by Short Stack Foodie at 10/15/2013 04:30:00 pm