“(S)He was swimming in a sea of other people’s expectations. Men had drowned in seas like that.” ~Robert Jordan, New Springs

Perhaps, a tad dramatic, I admit.  But it's been a solid month of non-stop-go-go-go, and the cold-sore on my face means that I've hit a wall.  Although, judging by the size of this cold sore, it looks as though a wall hit me.  In a self-induced-pity-party the other night while doing dishes and making lunches for the next day, I exclaimed with a great sigh "HEAVEN HELP ME I NEED A BREAK!!!"  Then the phone rang.  There was a great discussion.  Then I got all excited about the possibility of a new business opportunity.  My mind began to race.  World domination was within my grasp!  (Or that's what it felt like ...) And when I told DH of my new plans, (a mere 10 minutes after my great exclamation of needing a break) he smiled, nodded his head and without even uttering a word, I knew ... that I was ... quite possibly ... the master of my own demise.  Were it not seconds ago that I believed the weight of the world was in fact resting solely on my shoulders?  The fear that if I stopped to catch my breath ... life as we know it would ACTUALLY come to a grinding halt!  Seas would churn.  Volcano's would begin to rumble.  Nickelback would release another album (snicker-snicker) ...


Perhaps it is not the expectations of others that cause Type-A personality-Virgos such as myself to head into a tail-spin of frenzy with "all the things that need to be done" ... but it is, in fact, ourselves!?!?! The horror of this self-discovery sent me into another tail-spin of one-sided conversation as DH sat patiently on a kitchen chair letting me ramble on ... bless him, I mean really, who would sign-on for this kind of French-Canadian talking-insanity?  Even the cat left the room ...

As I paused, to catch my breath (I was getting a bit dizzy from talking non-stop and not getting enough oxygen to the brain) ... I then thought ... on some level, isn't it exciting to BE busy?  Isn't it exciting to have new challenges, new adventures and new opportunities?  Isn't life about LIVING and being active and being out-and-about experiencing new things!?!?!?

Dear reader, this is a glimpse into the whirlwind that is my pea-brain.  It explains why my hair is curly.  And why I stopped growing at 4'10" ... I simply had to stop growing, because I had too many other things to do (surely it has nothing to do with the fact that my parents are Lilliputians).  It also explains why I will ALWAYS have a to-do-list.  Why I will always try and cram 32 hours into a 24 hour day.  Why I HAVE to go to yoga at least once a week in a attempt to calm (if only for a few hours) my brain.

Where am I going with this train of thought?  Ah yes, this blog.  It has been causing me stress that I keep moving "update blog" to the bottom of my to-do-list.  So with the final days of ski season (err, "winter") behind us, and sneaky daffodils peaking thru the dark soil under our crab apple tree, I am reminded that Spring brings rejuvenation, a chance to 'start again' and in some strange way, it feels like a new year is beginning.

#1. Well, a month or so ago, I joined the Food Bloggers of Canada.  Foodie-nerds unite, this group is so chock-a-block full of amazing resources, listings of foodie events and all-around wicked-good bloggers, I am humbled that they let me join them ... it's kind of like being allowed to sit at the "cool kids" table in high school ... only better 'cause you don't have to go to Algebra after lunch ... 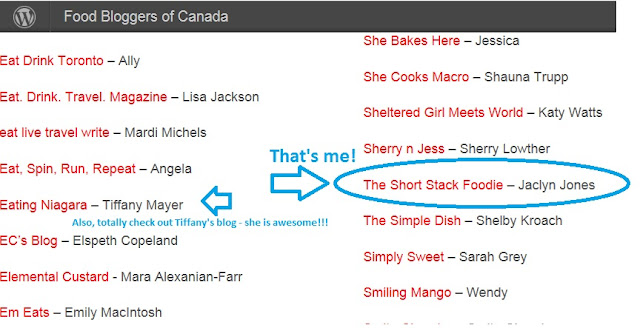 #2 - My March Vegan food buddy hailed from BC (originally from Waterloo where I went to University) - Chris, from the blog "And Mommy Makes 3" sent me some kick-a** vegan treats, complete with a recipe for Raw Granola (knowing how much I ADORE granola and dabble in creating soon to be world famous "Granole!" this was a REAL treat!!!)  The package arrived in my mailbox on a cold and rainy day, and it was (at the risk of sounding like someone out of a Disney film), an absolute ray of sunshine!  If you need a ray of sunshine or are toying with all-things-vegan, I really cannot stress enough how much fun MeShell's penpal program is ... no, she doesn't pay me to brag about her ... I do it for free ... in a totally unsolicited manner ... am I gushing?  I'm totally gushing, but it's totally great ... totally ... check it out ... http://meshell.ca/blog/
﻿
#3 - Ski trip to Lake Placid with DH and DD - my "ski boys" - was a welcomed break to this long winter we've had ... err .. no that's what people who vacation in hot destinations say :) We ski most every weekend, but this was a trip to a "real mountain" - and oh what a mountain it was!  Mamma-Bear stayed home to take care of our fur-child (good excuse for snuggles AND she doesn't like to ski) while the boys and I headed for New York State.  We spent our week in a GORGEOUS apartment that fronted the main street, we ate 'til we thought we'd be sick (then we ate some more), and skied 'til our legs felt wobbly, and then we went hiking and to see the old Olympic venues.  If you've never been to Whiteface or Lake Placid in general - go now, go quickly, go at once.   Oh and if you're looking for someone to share gas-expenses with, lemme know and I'll pack my skis at once!

#4 - My April Vegan food buddy hails from Toronto.  Gabby.  Her name is as fabulous as her blog "Veggie Nook" and she SERIOUSLY went above and beyond.  I'm not sure how our Postal Carrier managed to CARRY the package of yumminess, it was BURSTING at the seams!  The chocolate "treat bar" barely made it out of the envelope before it fell gracefully into my mouth ... ya', I say "gracefully" when in reality I devoured it like the way a wild-cat devours an antelope ... except with a little less 'meat' involved.  AH-mazing.  The package was complete with a lovely hand written note and my desk at the office is now filled with vegan snacks to help stave off hunger ... I occasionally skip lunch in favor of working on Client projects ... I know, I know, I'm such a try-hard ...
﻿

﻿﻿
I could go on and on ... yikes, I've forgotten to mention the Paris-themed-weekend-retreat we co-hosted in mid-April, the fundraising we're doing for our Weekend to End Women's Cancers Team and recipes of any sort ... I didn't even rave about my amazing lunch at Red Canoe in downtown Burlington ... bust out the to-do-list, I've got some additions! :)
As I said, it's been a busy month-and-a-bit, but for those of you who have managed to read to the bitter-end of this post may be experiencing eye strain!  And I need a fresh cup of coffee ... so until my next post - make sure you're living life to the fullest ... or at least make sure your bellies are full ... either way, stay happy friends :)
Posted by Short Stack Foodie at 4/22/2013 11:38:00 am